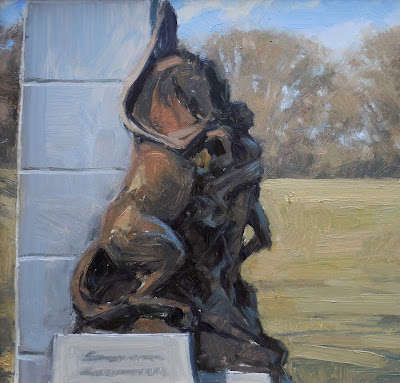 I spent the day Sunday painting with Anne Blair Brown. We started on 12th Ave., a trendy urban area with unique restaurants and shops, and ended up painting in the "Gulch", another hip upscale urban oasis. Got a pretty nice street scene out of the 12th area but in the Gulch we tried to paint some trains parked in the train yard down from the Union Station. After getting started they had to move the trains. Not sure why but I'm not a train engineer. Just got my drawing straightened out and here go the trains. They would back them up, pull them forward, move one then two, up, back, etc. Didn't look terribly productive but like I said, I'm not an engineer. Anne actually finished a nice train sketch even with the moving of the subject matter. She said it is the equivalent of painting livestock. Square, metal, graffiti sprayed livestock.
Planned on painting another but Anne had a social engagement that went late and we were afraid to start another so I headed home. On the way I spotted the Battle of Nashville Monument in a small green space along Granny White Pike and had a little time before dark so whipped in and set up. From the parking lot there you get the view above. I have seen a couple of paintings of this thing and Michael Shane Neal did one that was just incredible. So I thought I would throw my name in the hat.
Sheesh. It was a drawing nightmare. That and the fact the sun was in, the sun was out, the sun was in, etc., etc.. I did the profile because I could just set up by the truck and save time but someday when I have the time would love to go down and try it from the front. Composition is another issue that makes it tough because it is thin and tall. The portion I did is just the bronze area.
The battle that this thing memorializes is the battle that raged in the areas of town that are now Forest Hills, Green Hills, Brentwood and down streets like Granny White and Franklin Road. Areas that are now some of the most affluent areas of Davidson County. It is hard to imagine what went on in these areas when you are looking at gated neighborhoods and million dollar homes. Apparently after getting thrashed at the Battle of Franklin, General Hood moved his army up to the outskirts of Nashville. There he ran into the defensive lines of Schofield, who had defeated him at Franklin and then moved to Nashville to join his army with that of Gen. George Thomas who had been defending Nashville. When you drive through the south end of Nashville there are little metal signs everywhere you look commemorating the major areas of battle. I recently went to the area of Shy's Hill, where some of the most horrific action took place. I think it may have been one of the first areas where the confederates began to break and retreat. It sits in a tiny little space with houses and drives ways and swimming pools. It makes it hard to imagine the din and noise of the mayhem of December of 1864.
Posted by Kevin Menck at 2:48 PM 3 comments: 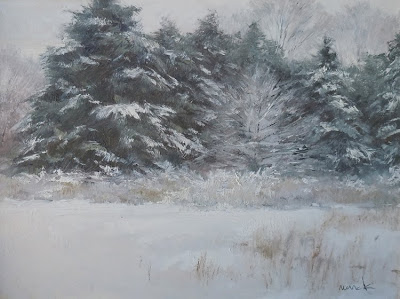 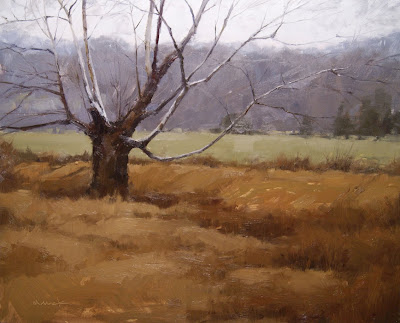 I complained because I don't get to paint snow enough and voila! I'm getting to paint snow enough.
We have had another snow and this one was a wet snow on a relatively warm day. I had been painting in the studio the past few days due to rain and it was REALLY good to be back outside again. I know there's a lot to be said for studio painting but I ain't saying it. I think that's what caused me to shift from illustration to this to begin with. That isolation of the studio will have you climbing the walls after a couple of days. It might be different if I had a studio with a couple of other artists around but here at home it's just me and the dog and I'm sure he's getting a little tired of me asking for his opinion.
Posted by Kevin Menck at 8:40 PM 1 comment:

I will be teaching classes again at Leiper's Creek Gallery starting the 27th of this month. The classes will be every Thursday night from 6:00 to 9:00 for six weeks. The class will be on the fundamentals of landscape painting. If you are interested contact Kay Farrar at kay@leiperscreekgallery.com .
Posted by Kevin Menck at 6:51 PM No comments: 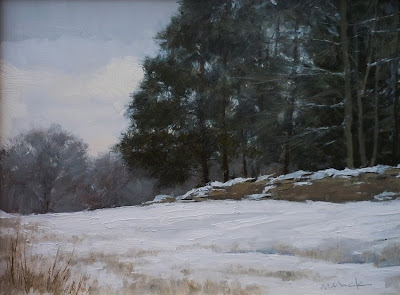 I know the snow paintings have a reputation of not selling well, but to me they are the most fun to paint. I love how the landscape looks with snow on it. I'm sure if I lived up north in, say, Alaska, I might grow to hate it. Too much of a good thing. But since I don't see a lot, I just love it. I will say this though. Since I don't see a lot or paint a lot I have a hard time rendering it. It's tough.
I looked up a painter named T. Allen Lawson when I got home after finishing the painting above. I think he handles snow as well as anybody. His snow paintings are beautiful. What I see in his paintings is what I see when I am out there, especially on a grey day like we have had for the past week. There is not a lot of color to the snow fields, a pretty consistant color of grey that leans toward a plum(?) maybe. It has red as well as the blue. And real tight value shifts and temperature changes. I have a habit of making it too blue and then over correcting and making it too warm creating this wonderful muddy effect. There is a precision to a grey snowfield, that perfect value and temperature that if you miss by a little, it reeks.
The painting above was done about two miles from my home. There is an area near where I live that they have been able to keep some of the old dry stack stone walls, some I assume are from pre-civil war, and when the snow is on top of them they are absolutely gorgeous.
Posted by Kevin Menck at 8:25 AM 7 comments: 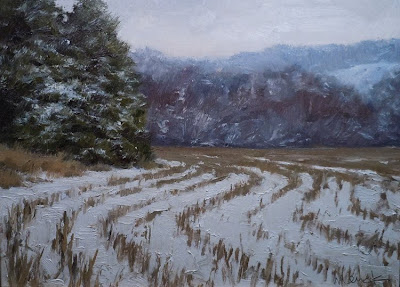 and it's not the cold, it's the wind. 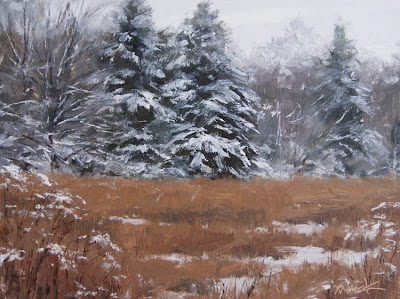 The temperature this morning was not that bad, maybe upper 20's t0 low 30's. But the wind. Geeeez. It would blow gusts so strong it would pick up snow and blow it sideways to almost whiteout conditions. It looked like something in the Dakotas. Fortunately it was just those heavy gusts that caused it and I could get a little done between. But it was still bad. So bad that I bailed out after one. Had enough.
Hopefully the wind will settle down a bit tomorrow and I can get something done.
Posted by Kevin Menck at 3:59 PM 6 comments: 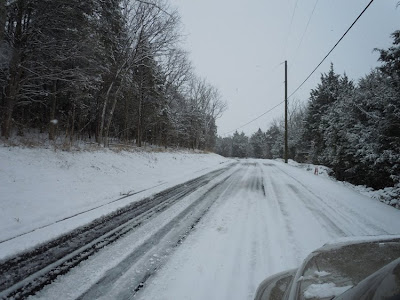 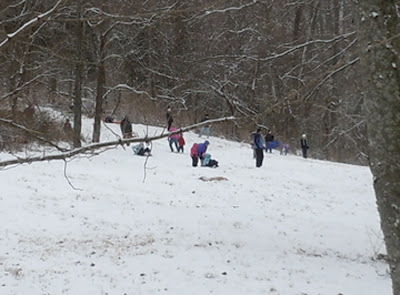 We have had a snow in Tennessee. And it was a good one. For Tennessee.
I am sure the folks that have relocated here from the north may wonder what all the hoopla is about but for us it is a good one. I guess we here in Nashville may have 3-4 inches and some of the counties south of us have had 7-8. I painted here this morning and got one done and will paint around here again tomorrow but as ours starts to melt I may move down to Bedford County later in the week hoping theirs may last a little longer. I will post paintings when I get photos.
This morning I spent a few hours just riding and looking and I hit all the hills famous for the sledding. Suicide Hill, Steeplechase, Natchez Trace. Saw one kid sledding with a kayak. And it worked.
We have more snow predicted for morning but hopefully I will be able to put in a full day painting. Unless I come up with a good kayak.
Posted by Kevin Menck at 8:05 PM 2 comments: 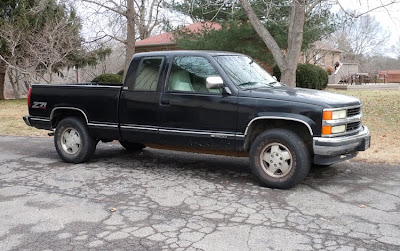 What you are looking at is the finest automobile that has ever been made. I know Justin Bieber thinks his 200,000 dollar Ferrari F430 is "all that" but I don't think it could carry a field dressed deer to the checking station. There.
I bought this truck in 1994 and at that time it was the finest truck on the road. And every day I would get up and it would start so I just kept starting it and driving it. Little did I know I would be driving it 16 years and 365,000 miles later. It has been on more logging roads than paved roads, has been in/through about every river/creek/tributary in middle Tennessee and has pulled every boat I have owned and every trailer I have hooked to it without fail.
A couple of years ago I was having a little trouble passing emissions testing and I found a mechanic that could get me through. He helped me the last few years with leaks and noises I couldn't decipher and kept me going. I told him that I took my daughter to her first day of kindergarten in that truck and I wanted to take her to her high school graduation in May in that truck so we had to keep it running. Unfortunately neither the truck or my mechanic made it.
I had a "miss" in the truck last summer so I decided to change my spark plugs hoping that would do it and I noticed that a couple of my plugs were wet and gummy and oily on the ends which is the automotive equivalent of finding "a lump". And it was terminal. I worked with my mechanic and we determined that I was leaking oil in the number 4 and the number 6 cylinders. A rebuild or a brand new motor was all that would fix it. Dang it.
I called the mechanic's shop the end of September:
"Joe there?"
"Joe is no longer with us."
"What'a ya' mean? He can't quit, he owns the place. Has there been a coup?"
"No, I mean Joe died."
Thunderstruck.
Apparently it was a heart attack. Joe was, maybe, retirement age but to see him work he was a fireball of energy and grease. Could work me under the table. And it was fun to watch him work and get after a problem in a vehicle. Didn't seem like the kind of guy that would ever die.
I sold my truck off last week. For scrap I guess. I picture Joe getting to heaven and saying, "Lord, I'm gonna' need something to work on."
Lord said" I know just the truck. It has oil leaking into the 4 and 6 cylinder."
God's going to LOVE driving my old truck. And as for those damn brand new Michelin tires I put on it right before it broke down, you're welcome.
So here's to Joe Gallagher and Chevrolet Silverado VIN number 2GCEK19K5R1141478. I will sorely miss you both.
Posted by Kevin Menck at 5:01 PM 10 comments: