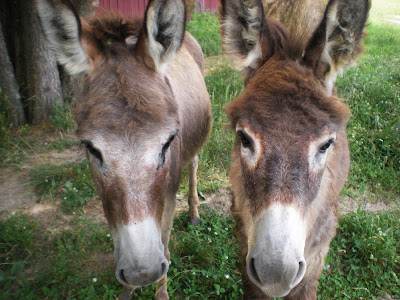 The two donkeys above are two of the most "social" creatures I have come across.
I have access to a farm in Leiper's Fork and it's where these donkeys apparently live. I take my class out on Thursdays and we had a group of six that got together recently to paint there and invariably these two characters roll up. They lick palettes, nose through equipment bags, put their heads through open windows on vehicles, and try desperately to obtain whatever beverages we may be drinking on that particular outing.
Also, here in Tennessee, the heat is on. It has been miserably hot and has cut into my paint time. I actually went very little this past week relative to what I normally do and I went with Jason Saunders Friday morning and it is the hottest I think I have ever been while painting. My life was actually saved by a three scoop chocolate waffle cone at the Mount Pleasant Cafe. Tragedy averted.
Posted by Kevin Menck at 7:22 PM 2 comments: 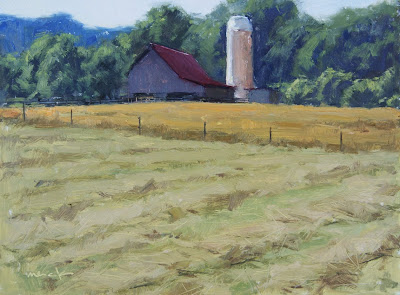 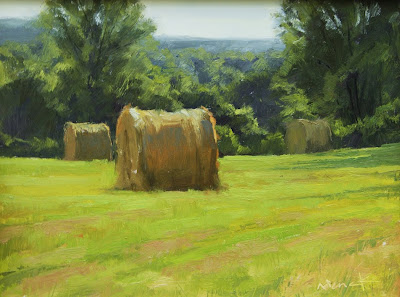 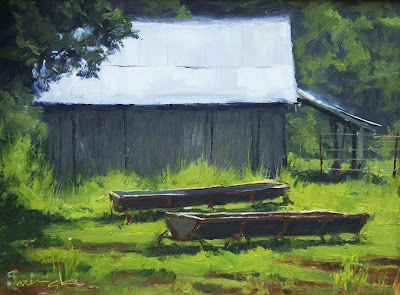 I had a student ask me if I ever get frustrated while I'm painting.
"Heh heh, who me?"
I told them yes and I am sure we all do, it's just that I have learned to approach it differently now than when I started. I have learned that if you can see through it, calm down long enough, there is usually a very significant lesson to be learned.
I remember an incident for me about three to four years ago as I was standing in the middle of a vast cornfield trying to paint. It was mid day, sun was bright and it was getting hot, but the biggest issue I had that day, the one that REALLY sent me over the top, was this slimy, slippery quality to my paint application. Wouldn't adhere to the canvas, just slid. I lost it.
Now, I could have picked up my Open M Box and thrown it like a javelin. Or probably gotten pretty good distance with a "shot put" technique but I went with the tried and true "hammer throw" namely because I was clear headed enough at that point to realize the chemicals I had assembled on my palette would spin off harmlessly in an arc away from me. It was pretty good distance too for someone in hunting boots and blue jeans. Had I had on those little tight athletic clothes and shoes they wear there's no telling how far I could have pitched it. Point is, after I calmed down and had that moment of clarity, I saw myself standing pathetically in this vast cornfield on this vast planet and realized how small this all was so I went over, dusted it all off, stood it up and really thought about why I got frustrated. Analyzed it. Really tried to get to the bottom of it. I was using Liquin as a medium at the time so I thought I could try the next painting without it. Maybe that was it. Bingo, it got a little better. Lesson.
So now when I get frustrated I see it as a lesson. There is something there that is causing the frustration and if I keep my wits I might be able to analyze this and figure it out. Another lesson.
They say pain is the body's way of telling you something is wrong. I feel that way about frustration when I paint. I need to analyze what I am doing and try to fix what is causing the "pain". Sometimes it works and others it doesn't but it is much better than flinging an Open M Box across a cornfield.
Posted by Kevin Menck at 3:31 AM 9 comments: 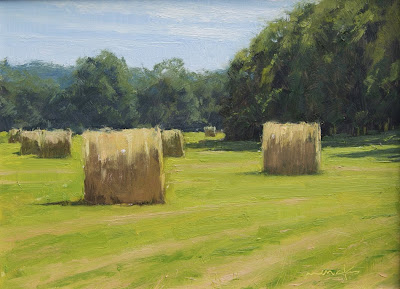 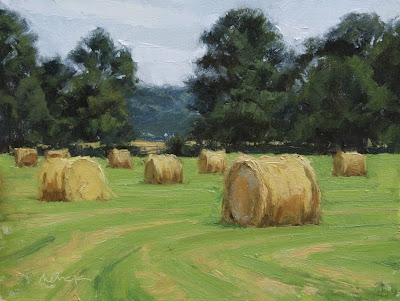 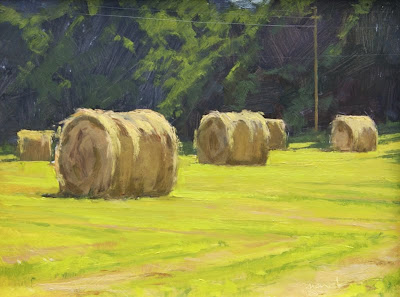 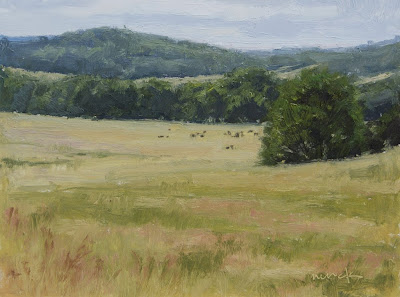 Everybody is in the hay right now in Tennessee. All the hayfields are being cut and rolled so I am again this year making the effort to paint them while I can and once again I will say they are some of the hardest subjects I paint. Trying to get them to look right in perspective, to get them to lay on the ground, to have weight and to draw the ellipses correctly are just a few of the drawing problems. And for whatever reason, for me, they are incredibly difficult to judge and paint the values right. Maybe it's the Benedryl.
I was also invited to paint with Jason Saunders and his students during his workshop. He has developed such a reputation as a teacher and instructor he has people attending from all over the country. Had a lady from Michigan at this one who had driven 9 hrs to be there. In the class I teach, if I get someone from the next county over I get pumped.
Posted by Kevin Menck at 6:35 PM 6 comments: 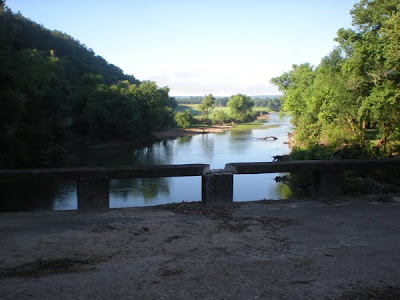 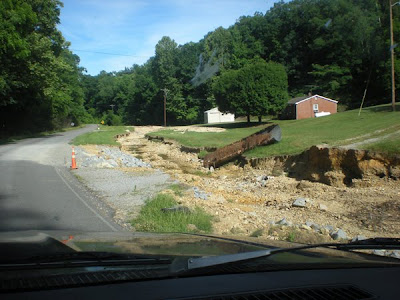 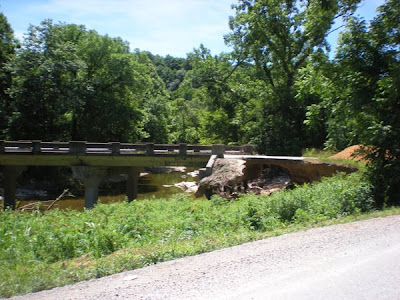 I wanted to post one more time about our recent flood. It seems that everywhere I go now to paint I am confronted with "Bridge Out" or "Road Closed" or "Detour" signs. Everywhere. The damage is so widespread it leaves me speechless on most days by the time I get home.
I typically take the Natchez Trace out of Nashville to get to 90% of my painting areas. Leiper's Fork, Fly, Watervalley, Hickman County. There is not one community along the Natchez Trace that has not been gutted. As a plein air painter I spend a lot of time riding the back roads and every low spot or dip in the road or creek or gully I have seen has been completely destroyed. What used to be meandering little creeks are now giant cavernous ravines. And the amount of gravel that has been piled up in yards and on farms is astronomical. Where did all that gravel come from? One of the most shocking sights for me was the Totty's Bend Bridge in Hickman County. I know if you have never seen it it won't have the impact it would for someone familiar but the Totty's Bend Bridge had drift on it! The water actually got over it! I have posted a picture with the river in the distance but I don't think you can tell that that bridge is probably 40 feet from the water! I NEVER thought water could reach that bridge. Yet there it sits, closed, with trash all over it.
I have to say, the road crews have done a very good job getting us back to some sense of normalcy and convenience but I would guess there are areas that will never be the same. It is just a miracle that more people weren't killed.
Posted by Kevin Menck at 2:10 PM 1 comment:

For those interested, I will be teaching a landscape class again at Leiper's Creek Gallery starting June the 17th. It will be conducted mostly outside if the weather co-operates and will be Thursday evenings from 6:00 - 9:00. To sign up contact Kay Keyes Farrar at dkisfarrar@charter.net.
Posted by Kevin Menck at 12:59 PM 1 comment: 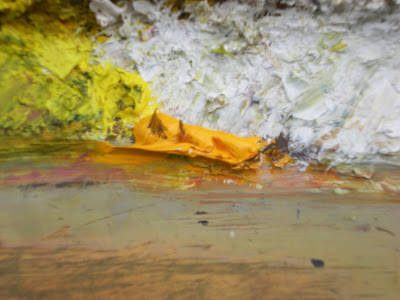 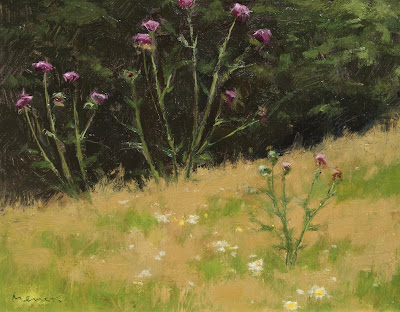 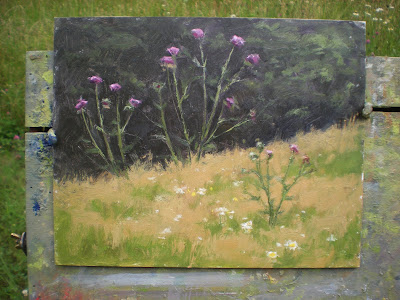 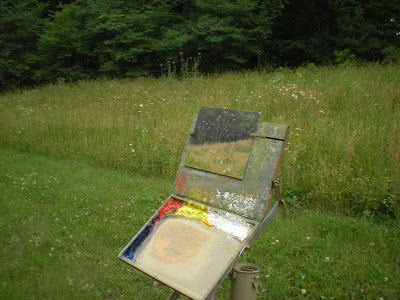 I have a color that I can't do anything with. It has the palette personality of Lindsey Lohan. No matter how many chances you give it, it just can't be controlled and doesn't get along with any of the other colors and generally makes a mess out of every situation it is exposed to.
It's Cadmium Yellow.
Anne Blair Brown gave me a little last week and I have tried to use it a couple of times since and for whatever reason, the colors I get with it seem to be muddy, garish. The greens get very yellow ochre or too warm maybe? Not sure if it is a technical issue or the other colors I have on my palette or even a personal matter due to my familiarity with what I use and it being something different. Just can't get anything I like with it. I have also added Alizarin Crimson and have started using it a bit. The thistles above are an example of a color that looks better with the AC than just Cad Scarlet. I am also considering adding a blue of some sort as long as I can find one that doesn't become a "Brittany Spears Blue".
Posted by Kevin Menck at 10:59 AM 8 comments: