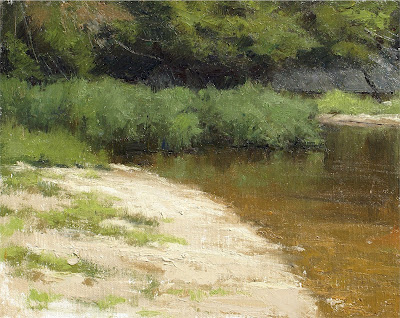 Got to stand at my Open Box M and watch what happens when you mix oil and water.
Painted at Swan Creek yesterday with Jason Saunders and it immediately started a light rain. I have painted very little in the rain in the past, drizzles mostly, so a constant steady rain was trying. The paint takes on this slimey mushey quality that makes it very hard to control, especially when you are trying to go over an area with a thicker stroke. It kinda' slides. I had thought about trying to add the little rings of waves where the rain was hitting the creek but I just didn't know if I could make it read as raindrops, plus, did I mention it was raining. The coolest thing about the chemistry of this is that you can just shake your art or blow on it and the water beads right off. Now if I could just get my digital camera to do that.
Posted by Kevin Menck at 1:31 PM 2 comments: 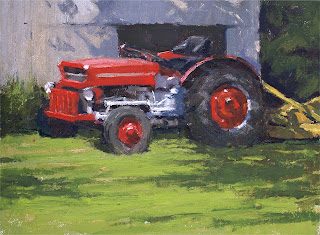 This is a good friend of mine's Massey Ferguson. It has been around Totty's Bend a lot longer than I have and like me has probably seen better days. However, when you turn the key we both start and still have a lot of work left in us. Recently they bought a brand new John Deere 4- wheel drive, top of the line tractor.The inside is nicer than my pick-up. Climate controlled cab, sound system, captain's chair. More to it than I can list here. 65,000 dollars. No, I didn't add an extra 0, it was 65,000 dollars. I am not quite sure how farmers do what they do with the price of land, fuel, feed, equipment, weather, etc., etc., but they are getting it done because I just sat down at my dinner table and ate like a horse thanks to a farmer.
Posted by Kevin Menck at 4:25 PM 2 comments: 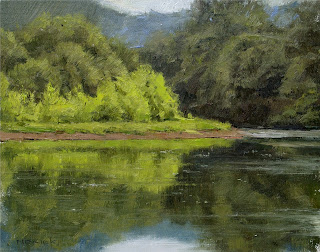 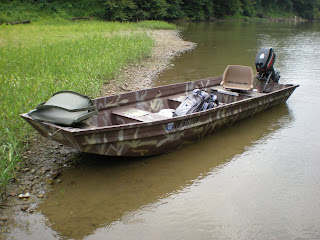 Got the boat out again this morning and went back up the river to the same shoal I painted on Wednesday afternoon. The view in this painting is the shoal I stood on in the previous blog to paint. I was actually standing where the deer crossed Wednesday.
I also tried to paint one sitting down in the boat. I have stood up to paint for so many years that I couldn't sit down to paint. It was awkward and clumsy feeling to the point I gave it up. I never really thought about it but I guess we are creatures of habit. The most aggravating aspect of it was handling the garbage bag. I usually hang it under my tripod. In the boat I just laid it next to me and had to pick it up and open it each time. I guess I need to practice though because there are tons of great views on the river with no shoals to stand on and the only way to paint them would be from a boat.
The shoal I painted this morning I have painted quite a few times. It has some wonderful vegetation on it with willow trees and a small row of sycamores. It was a bit overcast so it became another exercise in mixing close value greens.
Posted by Kevin Menck at 3:38 PM No comments:

Adventures on the Duck 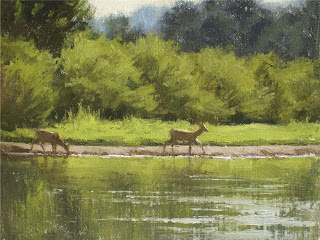 Every second on the Duck River is an adventure.
I commandeered Mookie's jon boat and put in yesterday afternoon at the camp. Noticing the level of the water, instead of starting the motor I started walking and pulling the boat instead. I walked at least a quarter of a mile right up the middle of the river. I don't know if the levels are that much lower but I don't remember being able to do that in the past.
After getting to the shoal I had intended, I grab my gear and started walking with a camera and looking for something to paint. I have a habit though of walking with my head down trying to avoid any serpentine shapes and lifting it from time to time to check the view. After checking the possibility of a painting there, will put my head down and continue to walk. I would have made a poor pioneer with my head down technique. After walking for an hour, would have picked my head up to be standing in the middle of Indians, or bears or something.
Anyway, walking around a gravel bar, I heard a noise and turned around to notice two small deer crossing the river behind me. Shot as many photos as I could and then realized what a nice painting it would have made. So I threw down my gear, did a painting of the landscape and thought I would add the deer later. I spent most of the day today adding deer. I actually wound up changing quite a bit of the foreground. Once you get it home and start screwing with it, it changes everything. When I paint out and get it home I have to make myself leave them alone. I have ruined more good paintings by trying to "fix" them when I get them in.
The only thing I noticed about the river, other than the levels, was the color. It has had an orange cast or color to it in the Totty's Bend area all summer. Typically this happens early and briefly in the summer and is related to an algae bloom but seems to have been a much longer period this summer due to lack of current. I can't imaging what this will do longterm to certain species of fish and wildlife but hopefully will be temporary. It does appear the river is changing though.
Posted by Kevin Menck at 7:06 PM No comments: 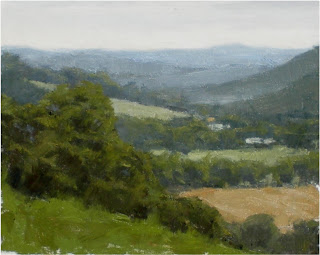 Painted at the Water Valley overlook on the Natchez Trace this morning. It is actually a great spot to paint with views in both directions. The Natchez Trace maintenance guy stopped to see what I was up to and he informed me he was an acrylic painter and enjoyed it quite a bit. I told him I had a hard time with the drying time of acrylics and he said that came in handy because your mistakes dried real fast and you could go back and cover them up pretty quick. Touche.
Posted by Kevin Menck at 12:13 PM No comments: 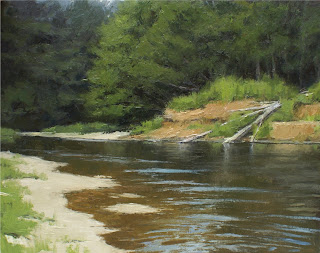 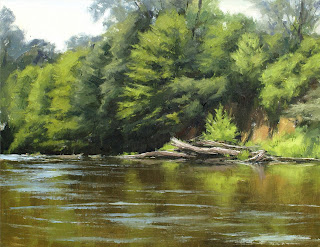 I painted in the studio the past week because the temps were so high during the day plus we had a couple of rainy days that made getting out a bit trying. I am not much of a studio painter. I struggle with it and because it is very clumsy and awkward for me I tend to put it off. But, I have made it a goal to try to do maybe one or two a week. I think it is necessary for my growth as an artist and my growth as a business.
Got two here that I pulled off "en plein studio". If I can get a good study to go by, and especially a good photo to supplement the study, I can usually get something done. My biggest issue is the lighting. I have tried a little of everything but until I can build this giant, cavernous studio with all that nice ambient north light, it will be a bit of a struggle.
I also am trying to paint larger. These two paintings were 14x18 and it was like painting the Sistine Chapel for me.
Posted by Kevin Menck at 2:34 PM No comments: 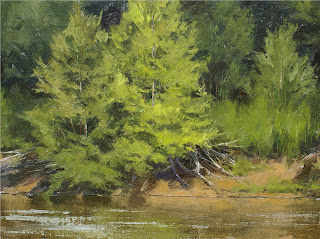 Painted again this morning at the same place I painted Friday, I just moved my view down the river about ten yards. This little cutbank has started to get some growth back on it from being completely denuded and the growth is mostly in Sycamores and scrub which makes it a lot of fun to paint because every color and value are pretty close and it can be a challenge to get any form out of it. There is also a lot of neat edges and textures that are fun to get in there and squirrel with.
Posted by Kevin Menck at 1:39 PM 1 comment: This is a little painting I did on Friday morning. It is a pair of Sycamore trees that sit on the Duck river. We used to tie trotlines to these trees back when the river seemed to have more water in it. Now, you can walk across the river here without it getting much over your knees.
There is an article in the Sunday Tennessean this morning about the toll development is taking on this river. There are quite a few growing communities in the area that are using this river for their water source and I think it is actually beginning to take a toll on the river. The water levels seem to be getting lower and lower each year during the summer. Development plus the drought we had has really had an impact on the river.
As far as this painting goes I was pleased with the result because it was a hazy gray day and the values were very close. It gave me a chance to try my hand at tons of diffrent greens with all of them being pretty close in value, with temperature changes between them to make it work.
Posted by Kevin Menck at 1:52 PM No comments: Man, I hate painting in the month of August. It gets so brutally hot here that to be able to paint you have to find some shade that doesn't move too much or paint very early in the morning on a semi cloudy day. The temps here are in the upper 90's with heat index in the 100's.
Painted the past week on cloudy, hazy, hot mornings. By the time you finish though, say 9-ish, it's already stiffling. Plein Air Nashville even called off their Saturday morning paint out because of the heat.
Ya' know, maybe I just need a studio/cabin in Alaska and every summer just bug out and stay up there until the heat is over. But then again, there is that chance that I could get scattered around by a Grizzly bear. It's always something.
Posted by Kevin Menck at 2:39 PM No comments: