This post has no artistic redeeming value at all. If you read this blog for its artwork and creative insight, skip this one. It is about white lies and tall tales. It is about..........fishing.
I write this because I had a fluke extraordinary experience. I had slept in and skipped the opening day of deer season but wanted to see my hunting compadres and share the stories so I drove to the "camp" arriving at lunch. No deer. "Haybale Farm Doyle" that I mention in some of my earlier posts, strolls in and asked if anyone wanted to catfish instead of hunt that afternoon. Didn't have to ask me twice. I'm in. 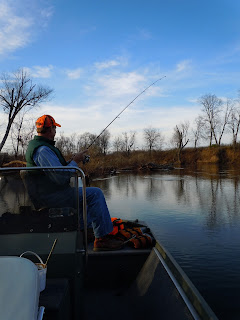 I actually wanted to see the river more than anything and if we caught a few fish, win win. I had not been on the river in a few years. I sold my boats and committed to this addiction of plein air painting so haven't made the effort to ride the river like I used to. I had not seen it since the flood of last year so I was very curious as to the extent of the damage. And let me just say that in areas it was profound, shocking. And then in others you never would have known it even rained. The volume of water and the power and force of it is still incomprehensible. Anyway, my trusty guide had the boat full of poles and "stinky bait". For those of you who have never used stinky bait, I am not quite sure how to describe it. I do believe this though: that it was developed by the military at some point to spread on a battle field and run everybody off of it. It is the most permeating, rancid, gummy, vile material I have experienced. If you get it on you, you will smell it days later no matter how hard you try to remove it. And catfish love it. And we eat catfish. Yeah, I know. After baiting, which consisted of sticking a spongey tube with a treble hook at the end in the bucket of stinky bait, withdrawing it and casting away, we got in to them. 23 fish later, all Chanel Catfish, sun was setting and we motored home. But in the time between the 23 fish, I saw some of the most gorgeous sights I have seen. Everything from Bald Eagles to Gar apparently spawning, not sure, but they would breach the surface of the water in acrobatic flips and spins. And some were at least two and a half to three feet long. I had never seen them do that. Pretty impressive creature. But by far and away the most attractive and impressive sight was the river landscape. If I thought I could logistically and financially do it, the river would be my one subject to paint. I ask artists I meet that have travelled and painted the world if they had one place left they had to paint the rest of their lives where would it be? Me, the Duck River. It's moody, earthy, colorful, ancient. And changing all the time. I saw millions of paintings in a 3 hour trip. Imagine how many over a lifetime. 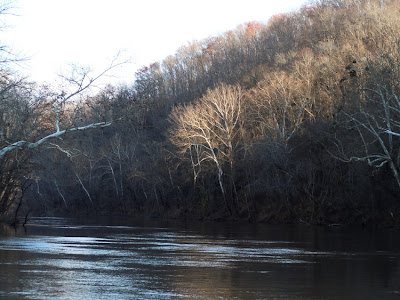 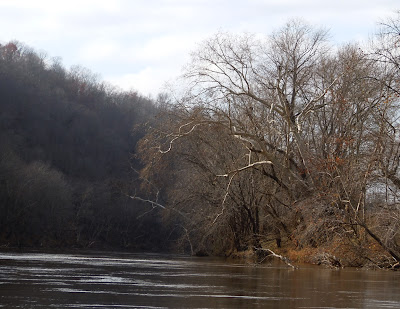 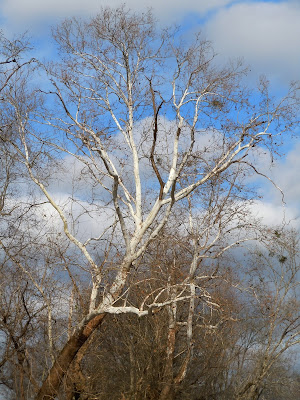 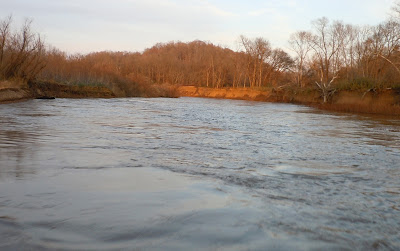 Saturday was one of those rare days, like finding money on the street. Didn't plan on it, couldn't re-create it if you had to, but grateful it happened.
Posted by Kevin Menck at 6:29 PM 7 comments:

Colors On The Trace 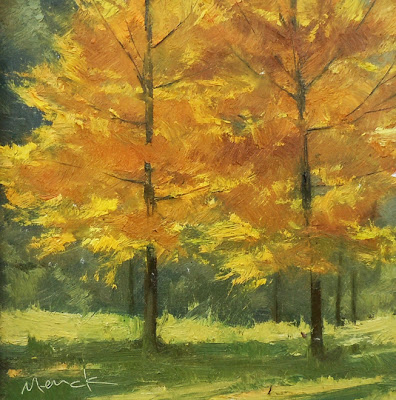 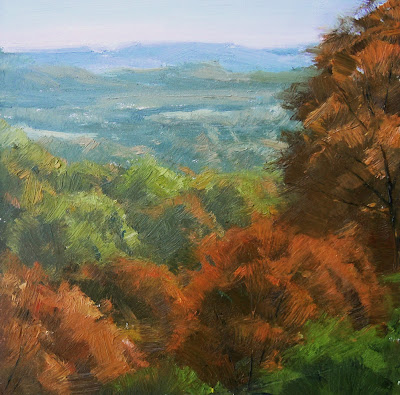 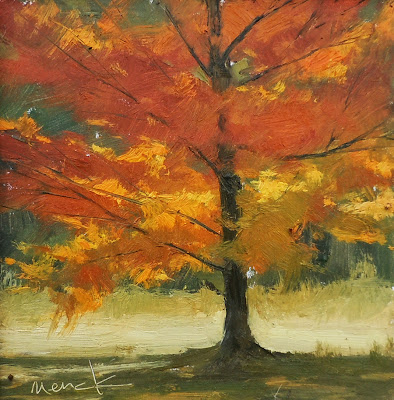 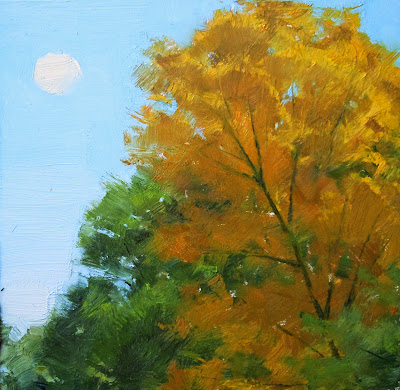 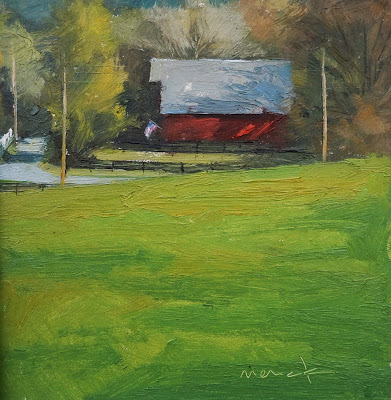 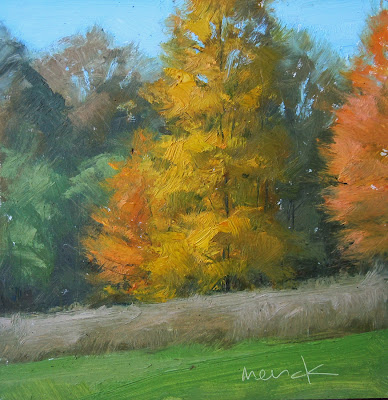 For the past three days I have driven the Natchez Trace painting some of the color before it goes and I almost missed it. It looks like it may have peaked here in Tennessee. There are pockets of color and it seemed the pockets were on ridges. Not sure why but the area between Leiper's Fork and Nashville had the most color and it got even more pronounced on the higher ridges. Monday and Tuesday I painted alone and yesterday with Diane May, Roger Brown and Beverly Evans.
As I sit here and write this though, the wind is blowing and the rain is falling so I believe I got what I got in the nick of time. Looking forward to the colors of winter.
Posted by Kevin Menck at 8:58 AM 5 comments: 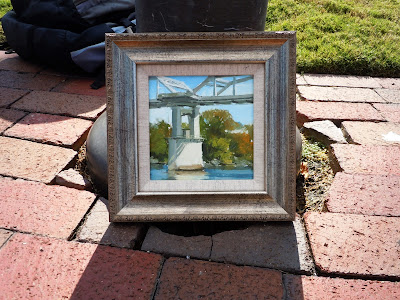 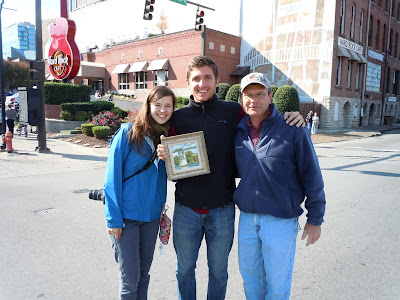 I painted Saturday morning with members of the Chestnut Group in downtown Nashville. The reason is the fact Nashville is having "Artober Nashville" which is a celebration of the arts here in Nashville with tons of events planned over the month of October. The one I was participating in was devised by Cathleen Windham of the Chestnut Group. The plan was to meet at Big River Grill for lunch and then fan out in that area and paint. The catch, or catches, was the fact you had only ONE HOUR to paint and you had to give it to somebody on the street. A stranger.
Lunch was great but then I felt myself vibrating a bit due to the ONE HOUR time limit. I set up along Riverfront Park and as I was setting up a young couple from Indiana asked me to take their picture and as I did explained to them what we were doing and told them in ONE HOUR if they came back they could have the painting if it came off well due to the ONE HOUR time limit.
After the dust settled and the time expired I had one I could give away. Wasn't bad. With all the whining I have done about the ONE HOUR time limit I think it is a great exercise for anybody who paints. Being able to get a very accurate start down in that time is an asset we should all try to have. Once I was done, popped it in a little frame and away it went to Indiana. I neglected to tell them though, the drying qualities of oil paint. Hopefully one of them realized it before it was demonstrated on their clothing or interior of a suitcase. 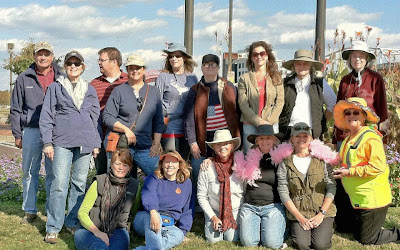